This is the Heritage Lottery Fund supported comic we just completed, Tales of the Oak...ideal reading for a Halloween. You can find some other Haloween related fun on the same Scribd page, including a witch trial to perform with your family. Smashing.


Tales of the Oak by Paul Bristow

If you're not keen on witches and unreasonably upset by badgers, you may also enjoy A Cure For Witches

If one free horror comic isn't enough for you, you must also check out Hallowcream 2013...96 pages of nightmares.

And support your local folklorists, by purchasing Magic Torch's new Ghost Story ebook A Nip In The Air.

A while back, I contributed to a selection of new "liffs" - originated by Douglas Adams and John Lloyd, liffs use placenames to create words for "things there should be words for".

One of my liffs has been published in the new collection; this is a very firm, if slender claim to fame, but in order not to spoil the fun of it, I have no intention of telling you which one is mine. If you buy the book, please feel free to imagine that the funniest one you read is mine. Meantime, another new selection...

Binegar
The gunk on your hand after performing a bindal

Arthingworth
To despise all public art on principle 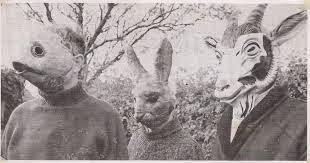 To celebrate the 40th Anniversary of The Wicker Man, an edited version of a fan-fiction mashup. Really wish BBC Scotland would consider optioning this for Hogmanay one year...

It was coming up for harvest time, and I was reminded of something Macfarlane had said the year before, about a trip he and the crew of the Vital Spark had taken out to a strange little island on the West Coast. The autumn sun, was low in the sky, and I thought I may be able to convince him to elaborate on this particular misadventure on account of it being such a balmy evening.

'It wass not a churney I would chuse to take again, no. And not fur any o the finest Pollokshaws tea. I will grant ye, it wass indeed the verry best fruit on the Western Isles, but it wass the strange fowk growin it wass the problem. Not strange like Edinburra types, thiss wass an aaltogether more particular strangeness, more like a Galloway strangeness, like Tressock or somesuch place. I would go as far as to say they were...unnatural. That did not bother us at aal at the time, sure we'd not long come back from Dunoon and there's more than a few uncanny sorts in Greenock docks as weel. However I wud be inclined to say, that world weary and imbued with the wisdom such as I am, even I wass not expecting such an odd trip aas this.

The cargo wass apples, it being harvest time on Summerisle - there were Gleska merchants we often ferried fur keen to stock up before Galoshans. Normally, as I'm shure ye would ken, the Fital Spark is more suited for the transporting of fine china and linens, but it headin towards wunter time, we were apt to consider a few quicker runs before shuttering down.

Late September it wass, with the nights warm enough, but on the turn. There wass not a one of us who did not enjoy a jurney doon the watter and oot to sea at this team o the season, fur there are better sunsets than ye will find in the warmer climes. No' that we get much of a chance to be sailin to the warmer climes, fur Macphail had that bad time by the Cape of Good Hope and now doesn't want us sailing past Hull.

The Tar had just scorched us aal some eggs as we reached our destination. It 's a pretty little harbour at Summerisle, but it wass our furst indication that thiss wass not to be a usual run, for there was a group of lassies, nekkid as the day, bathing in the bay. Sure, even on the Milport daytrips we had to do that summer, it wass nivver quite like that.
'Are they...singin?' asks Dougie.
'They are indeed Dougie,' says The Tar, 'and that's most certainly the most peculiar thing that could be said about them.'
Macphail wass after polishing up the spyglass the better to see us into port, when we saw the smiling gentleman on the shore.
'He seems very jolly.' says The Tar.
'Small wonder.' opines Dougie.
The maidens swam to shore, climbing out, very ladylike. After a fashion. Fur a variety of reasons it wass then all the easier fur us to dock. The Tar made a fine show of tying up, making even more of a meal of it than usual. Dougie and maself had the harder of the jobs, trying hard to find where to look, fur the ladies were still stood in the altogether, and, none too shy about it.
As we stept off, the ladies, still in not a stitch, slapped us gently with twigs and rushes. It wass Dougie who first cottoned on.
'This...seems a little like weetchcraft.' he whispers, so as not to offend the ladies by caaling them weetches. Yon was a hard lesson learned.
To be truthful, I had been thinking something similar, having once known a travelling lass on the east coast who claimed to be descended from the Egyptian. She was forever givin fowk the evil eye and cursin' something terrible.
'I...eh...I think I'll be efter clearin the hold fur aw the apples,' says Dougie, takin' a rare opportunity not to go ashore. Thankfully, and it must be said, unusually, The Tar and Macphail wur fur once only too pleased to help wi the heavy liftin', and wur doon the plank quicktime fur to get skelpt wi the sticks.

The Gentleman and a wee laddie were still standin smilin', welcoming us with open arms. And as ye ken, I'm none too fond o that type o over familiarity.
'Fine views in Summerisle don't you think?' he laughed.
'Ah weel, I wouldn't be bringing my old mither here fur the day thats fur sure.'
'Nonsense sir! I make sure my own son doesn't miss a moment of the celebrations!'
The Wee Laddie bowed politely. Very weel turned out wee laddie he was too, but I wasn't so keen on his cheeky wee smile..
'I'm the Laird of Summerisle,' says the Gentleman, 'I always enjoy showing new visitors around the island.'
The Tar and Macphail were jist aboot on bended knee thankin the Laird for his hospitality. I'm not a rude man, as ye weel ken, but I wass not of a mind to be stayin long.
'Is that fella dressed up as a fox there?'
As I pointed, this one ducks down behind a wall.
'Indeed! All the animals are out, ready for the ladies procession.'
Ah had a feelin it wasn't likely to be a Salvation Army parade they wur waitin fur.
The Laird led us through the wee toon, where aal sorts wur stoatin aboot the streets fallin doon drunk like it wass aw the Fayre weekends come at once. At every door there stood a wee table, piled high wi fruits, nuts and leaves. Kegs of beer and cider were passed freely up and doon the street and swigged as if they were meelk churns. My well quoted modesty permits me from discussing the antics I saw at the Kirkyard, but be assured ye wud not expect to see the like even in Govan. I am, as ye ken, a very patient and understanding man, but I felt that the Laird and his boy wur huvvin some sport wi us.
'Here now,' I says, 'what's thiss aal about? We are here for the aaples, not the shows.'
'It is autumn time Master Mariner! We must thank Demeter and Nuada for our bountiful harvest.'
'And can ye no thank them wi yer clothes on?'
'All the women are cleansing before the rituals. Soon, they will walk to their sanctuary in the caves, for fasting and sacrifice.'
Here The Tar nodded as if a scholar on this particular subject.
'And eh...do they put their clothes back on at any point?'
Laughing again, The Laird slapped The Tar on the arm, very over friendly.
'Will you not stay for the feast? It's only three days hence. The women will return with slaughtered piglets and wheat cakes.'
It wass clear to me, Macphail and The Tar wud have us stayin til Christmas and aaples be damned, but there was black magic at wurk. I cud feel it.
'Weel, that does sound...verry tempting. It's chust these aaples. Y'know what these Gleska merchants can be like.'
'Oh c'mon." said Macphail, 'a few days won't spoil them.'
I elbowed Macphail none too quietly to make my feelings oan the matter all the more plain.
Lord Summerisle smiled 'I've had my dealings with cityfolk, everyone is in a terrible hurry. Oh well, if we cannot tempt you, let us at least help you aboard with your cargo.'
Small mercy that fur aw his heathen ways, he wass still a gentleman. That's gentry fur ye. That Wee Laddie though, a terruble fire in his eyes.
A troop of burly well fed sorts appeared from nowhere and started throwing of the craates to one anither as if they wur boxes o feathers. In no time, the Fital Spark wass sittin fu' and we were settled.
'Macphail and The Tar moped aboot quite put oot by oor swift departure, but Dougie and I wud not huv stayed for anither whole boat fu o apples. We left then, puttin' the Summerisle behind us, with all its heedurum and hoderum, bound for Gleska and civilisation - if you can imagine such a terror.
'If we'd stayed but one night oan that island, we'd huv been hingin aff an apple tree by dawn' I said, to try and cheer up The Tar and Macphail. But it wass to no avail.

The craates of aapples stufft the hold, sure someone had paid a terruble price for that harvest. But nivver let it be said that they weren't the best of apples.
Dougie waas especially fond of them candied.'

Macfarlane grabbed an apple from a nearby barrel and tossed it to me, nodding sagely, having felt he had once again made his point. I was not of a mind to disagree.

A full collection of arcane Para Handy stories The Strange Cargoes of Para Handy is forthcoming. For now, you can read another story in the ebook version of Tales of the Oak. Or enjoy further spooky tales in our ebook Ghost Story collection A Nip In The Air, available on amazon for kindle.

And while we are on a nautical tip...how good is this item...exclusively available from The Dutch Gable House....Ghost Ship in A Bottle... 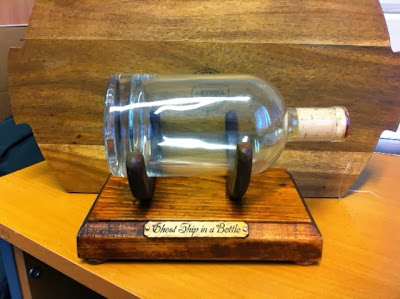 
She wore the smoke
Like a veil.
Shrouded in cloud
She waited.
Wanting me to say
I’m sure,
All the things I wanted to say.
But I was so interested
In the litter,
Gathering in the gutter rain
And the town clock
Barely visible through the grey,
That I forgot to tell her.
I forgot to say.
The chimes
Echoed through the weather
And the moment
Was washed away
As hopeless, as helpless
As a paper yacht at sea.
She turned
And though the rain
Had matted her hair across her face
In knots and curls
It could not hide those eyes,
Now two hollows, swallowing light,
Empty of me.
Tears fell
On cracked dry lips
That never kissed.
And that was the last boat I missed.