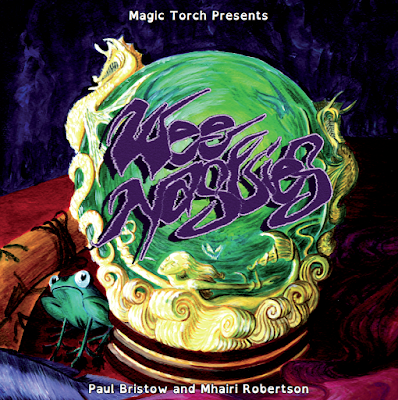 While I was turning my lockdown living room into a makeshift Jackanory studio, I recorded a version of my poem Wee Nasties as a test run for how to put the stories together.

It's been almost fifteen years since I wrote this, seven since we published it as a book, and I still enjoy reading it in schools and libraries.

And there's certainly a direct line between this and the work Mhairi and I did for the Sharing Stories project - not least the guest appearances by the Mermaid and the Frog... 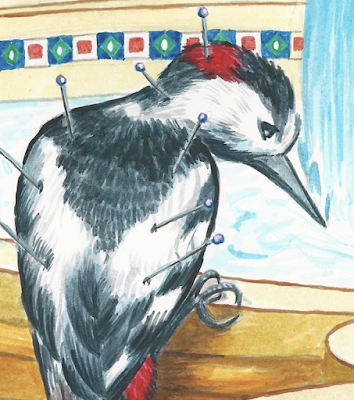 Of all the stories we were told, I think this was my favourite.

All of the women around the table were familiar with the character of Fatima, a female hero sent on a quest into the woods - just like in The Well at the Worlds End. The story has so many classic archetypes and symbols - maiden, stepmother, witch, well, transformation. There's so much to unpack and enjoy. And even though we were familiar with the Snow White / Cinderella elements of the story there were parts which were absolutely new to us. Mhairi's final illustration for this story effectively reflects some of the darkness of the story, and it's by far my favourite in the book.

It's also the longest story to tell, so settle in...

A version of the story read in Arabic can be heard on youtube.

Sharing Stories - The Wolf at the Door 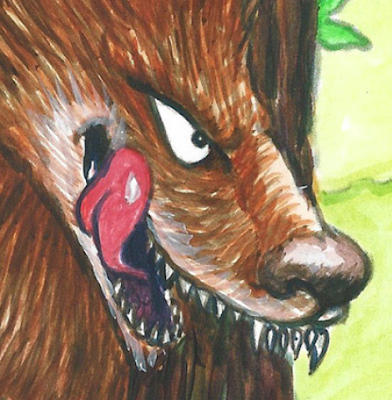 One of the first stories I was told for this project was the story of Fatima's Children. I was chatting with Tamadour and she just told it right off the top of her head - and I didn't have my recording kit with me! Fatima is a Snow White / Cinderella type character, who turns up in a few stories (including the final story we will be sharing this week) In Tamadour's story, she leaves her children at home while she goes out to work.

Some weeks later, Ilona, Alison and I visited Rouzine to talk about Kurdish traditions and folklore - much of which had been suppressed in Syria. Mostly we talked about the Newroz tradition and the King under the hill - but then Roijin spoke to us about Shengay and Pengay, which features two sheep left at home by their mother while she goes out for food.

Both are "wolf at the door" stories featuring a dangerous male character attempting to gain entry to a house. And of course we are perhaps more familiar with the version in which a wolf tries to get into the houses of the Three Little Pigs.

Our version of the story of Shengay and Pengay can be heard below, and there's a Kurdish version on youtube.

Thankfully, I did eventually manage to get Tamadour to record her Fatima's Children story too, which you can also hear below.

Sharing Stories - The King and the Water Seller 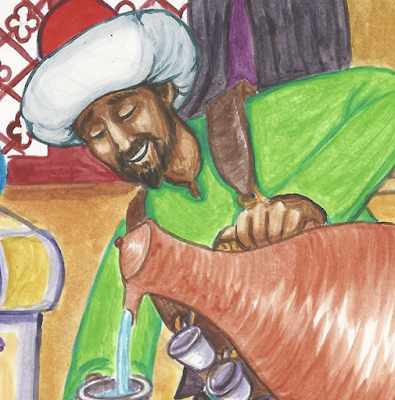 The King and the Water Seller story arrived at the point when I realised the Sharing Stories project was starting to come together. We had spent a few weeks with an ESOL group supported by Inverclyde Community Learning and Development, and the first few weeks were mostly hilariously awkward attempts to bridge the language gaps and generally plunging down into them instead.

But on this week, we finally established a rhythm, of reading, translating, scribbling and sketching - a collaborative effort to get from the start of a story all the way to the end. It was great. And once we had all figured out that this was how we needed to do it, the stories just kept coming... 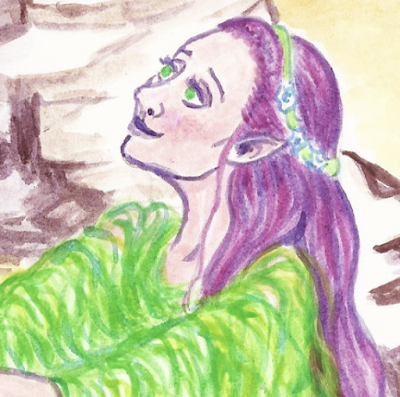 I've returned to the story of the mermaid in the River Clyde many times, she's in my book Wee Nasties, guest stars in the Rowan Tree Legion comic, has a number of stories on this blog - and it's one of my proudest achievements that we managed to get her commemorated on a heritage bench which sits in Port Glasgow town centre.

So when we were deciding which stories to share, there was never any doubt, we'd be telling our mermaid tale... 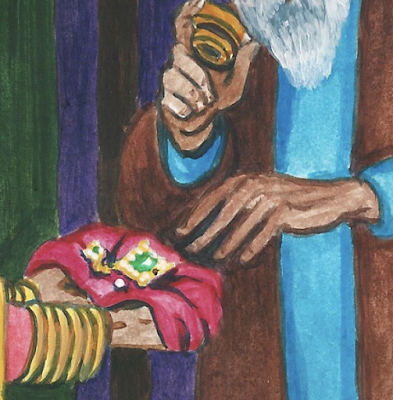 In the early stages of the Sharing Stories project, we looked to what other projects had done successfully to generate understanding and discussion around folk tales. We found out about the Timeless Tales project, which had been collecting Syrian folk tales in particular, generally within refugee camps. We used one of these previously collected stories - The King's Daughter's Earring, to share and explain the type of tale we were looking for, and heard a blended variation in return.

What immediately struck us, given that we were looking for connections, was that this story seemed to share the symbolism of the ring and the fish that we know from the story of Saint Mungo of Glasgow - so we decided it would fit nicely with our developing river / water theme.

Sharing Stories - The Old Man and the Apple Seller

This was one of the last stories we were told, in the last week of the project. Amal explained that her husband had been telling the story to his children each night over the phone, while waiting to come and join them in Inverclyde. We were delighted when Amal agreed to record us a version of the story which you can hear below, and then you can listen to our translation.