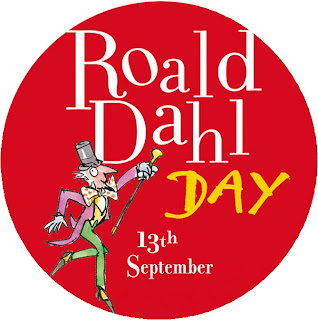 My gran bought me a book when I was 9, it was a book about Roald Dahl, about how and why he wrote books. I still have it. It totally made my mind up about what I wanted to do, but then I accidently became a community project manager instead. (Actually there was also a period in 1985 where I also wanted to program ZX Spectrum games...another dream shattered)

In celebration of Roald Dahl Day, a couple of poems written for my kids, totally inspired by his anarchic nonsense...


I met a zombie boy one day.
At first I tried to run away,
I tripped and fell, he grabbed my boot
And started trying to chew my foot.
To try and stop him eating me,
I asked him to come round for tea.
He grinned and gave a friendly groan,
Put down his half chewed bit of bone,
Then limped behind me up the street.
He actually was rather sweet.
"Hey mum!" I said, "I've brought a guest."
Mum did not look at all impressed,
But always is a perfect host,
So said she'd do him beans on toast.
But while we stood and had a chat,
The zombie started on the cat,
Then ate my little sisters dolls
And chased the budgie up the walls,
He attacked my mum's home baking,
Ate the buns that she was making….
"Enough!" I shouted, "That's enough!
Please just stop munching all our stuff!
I asked you round my house for food,
But eating pets and toys is rude.
Go on, beat it! Clear off! Scram!
I'm cross with you, I really am."
He dropped the home made lemon flan,
And made a beeline for my gran.
I couldn't take it anymore,
I pushed the zombie out the door.
He shuffled off, he looked quite sad.
I had not meant to get so mad.
I followed him back up the road,
He reached the graveyard and he slowed,
Not wanting to go back inside,
He stood there for awhile and cried.
I didn't want him feeling glum,
My poor wee hungry zombie chum.
I went and gave him some advice.
"No biting is considered nice.
No eating people that's the rule.
(Except the bullies from my school)
And if gran or mum get out of line,
A nibble on their toes is fine."
So now he knows how to behave.
Good manners from beyond the grave.
My happy zombie new best friend.
Undead funtime never ends.

This one was written for Christmas last year...