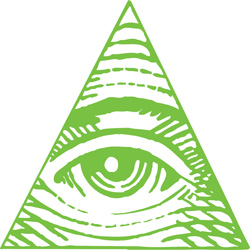 In the hidden meeting room on floor 23, the shadowy figures sat down and sipped their lattes in a most sinister fashion.
“Okay then. Hi.” said Mick “I'd just like to welcome everyone to the first quarterly meeting of the Brotherhood of Evil. First order of business is I suppose to decide exactly how we're going to control the world via our subtle behind the scenes machinations.”
Three of the figures nodded seriously, the fourth, Chris, put up his hand.
“Yes brother.” said Mick.
“I eh...I think I'm in the wrong meeting.” said Chris.
“What?” said Wendy from accounts.
“I don't think I'm supposed to be here.” said Chris, “I have absolutely no idea what you're talking about, so...I think I'm just going to...shoot off.”
Chris picked up his latte and stood to leave.
“Hang on! He can't go now.” said Wendy, “He's heard our plans. Kill him. Kill the infidel!”
Everyone looked a little confused.
“Him.” said Wendy, pointing, “Him there.”
“Listen. Listen with the greatest respect...you didn't actually have any plans.” said Chris “You just said you were going to rule the world.”
“That is the plan.” explained Wendy.
“What sort of a plan is that?”
“A secret plan. Quickly minions! Destroy him!” said Wendy.
No one moved. Then Steve coughed a bit.
“I think...I think actually that the minions might be on tea break.” said Steve, “Hang on....I'll buzz through.”
Steve commandeered the phone.
“Hi Carol...it’s Steve. Are the minions about at all? Right. Yeah. Okay.If you could just ask them to pop through when they get back. Thanks. No they've nipped out to Boots, Mark's got a bit of a sniffle coming on so..."
“Look. It doesn't matter...Wendy’s right.” said Mick, “Minions or not...he must be eliminated.”
“I don’t want to be difficult, but it's not really in my job description to eliminate.” said Steve.
“Yes. That's really why we have the minions.” said Wendy, “In fact, I've been meaning to bring this whole teabreak thing up. How can we seriously expect to usher in a new Dark Age if we can't even get these breaks coordinated?”
Chris crunched on a caramelised biscuit.
“That's really the least of your worries.” he said.
“Silence fool!” said Wendy, “Rest assured mortal, that when the soldiers of darkness return from Boots...”
“And once they've had a scone…” said Steve
“And once they've had a scone...you will be ripped limb from limb.”
There was an urgent knocking at the meeting room door, people quickly shuffled their agendas out of sight. Carol from admin entered.
“Hi. Sorry to bother you.” said Carol, “It's just, we're having a whip round for Susanne...”
“Oh is it this week she leaves?” said Mick.
“Yeah Friday. So we were hoping to get the card and everything sorted for tomorrow.”
“What are you getting?” asked Wendy.
“Just vouchers I think.” said Carol.
“Vouchers? You can't get her vouchers.” said Mick.
Chris finished his biscuit and took a final sip of his latte.
“Listen. You're clearly very busy.” said Chris, “And delusional. So...”
“Do not move!” commanded Wendy.
“Or what? What will you do?”
There was a silence, broken only by the 10 o’clock alarm bell test.
“Look I'll pop back later.” said Carol.
“Well?” asked Chris.
“Very well. Leave.” said Mick, “But know this...we will follow you always. And if you ever talk of all you have seen and heard in this place, we will make you...disappear.”
“How? You don't know my name or where I live so...”
Again silence. Steve cleared his throat.
“Run! Run while you can.” said Wendy, “For we are the puppet masters and the keeper of your destiny!”
“Right. Well...I'll be off then.” said Chris.
“The puppet masters. Ahahahahaha!”
The door closed and Chris escaped back into the safety of the real world, once again happy in his ignorance of all the machinations and schemes of the dark brotherhood.
“Listen I've been meaning to say, the toners going on that photocopier.” said Steve.
Posted by Paul Bristow at 08:30