Now When The Wine Is Drawn

(suggested by The Wind In The Willows) 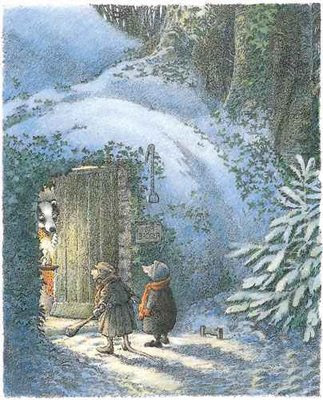 It was bitterly cold that winter, and by mid-November, Toad had resolved to quit the riverbank for sunnier climes and so left to visit a cousin in . The Rat and the Mole were sad to see him leave, however, autumns hot-air ballooning fiasco had thinned their tempers and a little less Toad was perhaps not too terrible a thing.

Of course no Toad also meant no Christmas feast at Toad Hall. At first Mole and Rat intended to spend Christmas at Rat’s home on the Riverbank, but the river had risen, then frozen solid and so Badger had kindly invited them to enjoy advent and yuletide at his home within The Wild Wood.

Badger’s winter provisions and wine cellar were legendary and for all his fire and thunder, everyone in the Wild Wood knew that he made sure there was enough to go around in the lean years.

So it was then, that just a few days before Christmas, Mole, Rat and Badger were sat by the fireside exchanging stories and songs. Badger had just finished an exciting tale of his father’s exploits during the Crimean War and now it was Rat’s turn.

“Well I have been dabbling with one or two poems, but I’ve nothing that’s actually finished…nothing ready for sharing…”
“Nonsense Ratty.” Said Mole “We’d love to hear whatever you’ve got written…ready or not!”
“Oh all right then.”agreed Rat “But you must remember…you asked for it…”
Rat removed the little leather notepad he always carried in his satchel, and cleared his throat to read.

“To move as the landscape
Balance and bob on the wash
Of the new, forever
Eroding the old.
There is nothing but stone
Left standing still,
And that, silent and alone.
Those old shadows will fall
For as long as the sun rises;
silhouettes, broken stones
Burned forever against the dawn.”

“Bravo Rat!” said Mole “Though it seems sad somehow.”
“Yes it does rather.” said Rat “Especially now I come to read it aloud. Ah well…there’s time yet to change it.”
The three friends sat and drank a while longer, laughing and reminiscing about Toad’s passions across the preceding year and speculating on what would be next. All too soon it seemed time to retire to bed.

It was not so very much later that Mole awoke to hear a scuffling sound. The noise had not wakened him, rather it was the glow of a light. An underground creature such as the Mole was used to that special darkness which can only be experienced beneath the earth in the dead of winter. Someone must have left a candle burning in the study. Mole decided to go and extinguish it but as he opened the door of Badger’s guest bedroom, he could see that there was no candle burning. Rather, it was Badger wandering off down one of the many passages which wound in and out of his home; the light from his lantern cast dancing shadows against the tunnel walls. Where could he be going at this hour? For a moment, Mole was in a dilemma, with his desire to be a polite house guest getting in the way of his natural curiosity. As Badger turned the furthest corner of the tunnel and the glow of his lantern began to diminish, Mole decided to risk the displeasure of his host and scurried after him.

Badger wandered further into the labyrinth of chambers and passageways than Mole had ever been before. He walked at such speed, that few times, Mole would turn a corner and find the chamber before him empty and dark. Momentarily panicked, the Mole would have to use his nose to keep track of his wise friend.

Just as it seemed that he could walk no further, Mole wandered round a bend and found Badger’s lantern hanging from the wall. This chamber seemed less grand than many of the others they had passed through – some of those had been filled with old and broken statues, long faded mosaics barely visible upon the walls. Here though, was more like a little cave. There was one carving on the far wall and in front of that, a little stone table at which Badger was currently busying himself.

It was only now that Mole could see that Badger had carried with him a knapsack which was now being carefully unfolded. From it he took two plates, two goblets, a bottle of wine and a selection of food. A picnic in a cave? Very curious.

As Badger continued to set his queer table, Mole again tried to examine the detail of the carving. It was a man slaying a bull, but there seemed to be other beasts as well, Mole leaned forward, squinting…and clattered his head against Badgers’s lantern. Badger turned immediately.
“Who’s this?” he growled “Show yourself!”
Mole stepped cautiously into the light.
“Sorry Badger. It’s Mole. I wondered where you were off to so late…I….I didn’t mean to intrude.”
For a moment, Badger was silent, then he smiled in his gruff manner, and Mole knew all was well.
“Not at all Mole…it’s been a long time since anyone joined me for this meal.”
Badger gestured to his table, now set for a small feast.
“Badger…I must ask…” began Mole.
“Why a feast in a cave in the middle of the night?” smiled Badger.
“Well…yes. I mean…not that it doesn’t look wonderful…”
Badger sat down upon the stone floor and motioned for Mole to do the same.
“Mole, many years ago now, when I was still a boy, my father brought me to this cave, on this same night in the middle of winter. We enjoyed the first of many feasts, just as he and his father had, and his fathers father. A tradition going all the way back to when these great underground halls were still a city.”
Mole looked at the carved relief.
“And is it somehow connected to this chap and the eh…poor bull?”
Badger chuckled.
“Let’s have a toast Mole.”
Badger opened the wine and filled both goblets. He passed one to Mole and held the other aloft.
“Sol Invictus!”
“Sol Invictus?”
“Yes Mole. The coming in of the light. This here, is Mithras” Badger pointed to the stone relief. “The men who once dwelled in this ancient city used to celebrate in his honour with a midwinter feast.”
Mole smiled.
“Well that sounds like a jolly way to remember anyone.”
“Indeed Mole. Indeed. All animals, man and beast must struggle against the winter and fight on into the springtime, counting ourselves lucky if we do. We feast and dance and sing to keep ourselves warm and the silent darkness at bay. Old Mithras here is a winter Sun King, giving hope that the sun will return and that all the life and greenery will be born once again. He wasn’t the first, nor the last, but my father taught me to remember him…and so I do. And in those moments Mole, I remember him too. I remember him too.”
For a time Badger sat silently, smiling, then he roused and bade Mole tuck into the feast, which Mole did, more out of  a sense of ceremony and propriety than actual hunger.

When they were finished, Badger took a moment to recite some latin verse, which Mole enjoyed immensely, and then he stood, and once again raised his goblet.
“To Osiris! And Belwe! Attis, Prydeni, Mithras! And many more. Sol Invictus Mole…the winter days grow longer and we are each morn now closer to Spring.”
“Sol Invictus!” cried Mole, quite taken with the occasion.

The two friends drank to the Sun King, while outside the snow and ice covered The Wild Wood. Finally, Badger solemnly packed everything away, and together they walked back through the tunnels, already feeling warmer than the season would suggest. 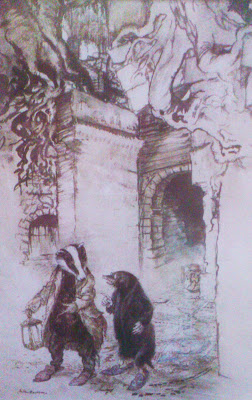 Many people believe there to be a connection between the Nativity and the story of the birth of Mithras.

Many other people believe this to be absolute nonsense.

The wonderful Arthur Rackham picture above hangs happily in my living room. It's my favourite.