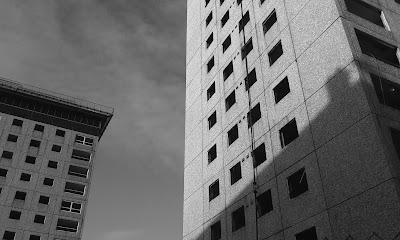 I see them still, those three lonely towers, rising out of the jagged depths and tearing into a grey indeterminate sky. All the windows were gone, the remaining black gaps, rows of punched out teeth seeming to suck in the thin light from all around. Below, the serpentine walkway slunk slowly down to the dark edge of the river.

The pale grasping fingers clawed at the edges of those empty windows and as long as we stayed back, as long as we only looked in upon that world from a distance, we would not be dragged into that formless, endless nightmare. But I did not stay back. I needed to see more.

I stood inside and alone, peering into the broken liftshaft, red and black fronds stretched up out to the roof, ripping through the ceiling towards the stars. Some of them still twitched and shivered, attached no doubt to some distant beast. Those same fronds also tunnelled downwards.

We see only the tips of those great monoliths, the concrete roots plunge deep below the foundations of the town, past those secret tunnels and ancient labyrinths that sit silent and forgotten, save for the disembodied spectres who howl hungrily within. Down, further still, are those coastal cave systems which lead into the cold black of the river. It is beneath the waves that the creatures gain entrance to our world, sliding and hauling their way blindly upwards to inhabit the interiors of the ruined flats; to feed.

I scaled the interior of the tower, dragging myself up through those horrors, the torn shreds of greying flesh, the piercing shrieks of unseen creatures and the rusted rattling of the rotted liftshaft. I hoped that at the peak I would find at least one of the sigils described in the ancient songs and stories of the area, relating to the river and serpent cults long in existence by this particular firth. With even one of those cursed symbols I felt sure I would be able to fight my way back down under the river to lock that black gate. It was all the time too late.

I reached the top of the flats, climbing back out into the night. Two heavy metal rings looped with strangely shaped green chains were fixed to the centre of the courtyard. Ragged leathery strips hung from the rings, perhaps some great creature had been tethered here, a guardian for the sigil. Whatever had been here, was now gone. A broken mosaic already faded by the sun was attracting moss. There was nothing of use, no signs or symbols to assist with any translations. My body could not take another ascent of either of the adjacent towers. In any case, success now seemed unlikely. The only hope now is to ensure that those monuments remain standing, standing apart from the town, for if they are ever to fall, there is no knowing what we will unleash.

My gran and granda lived in Melrose Court in Belville Street for years, and we were over the hiflats a lot growing up. I first read HP Lovecraft's "At the mountains of madness" at my grans - not because she was a fan of eldritch horror, just because I'd bought a copy at a second hand bookshop and read it there one night. The flats look pretty scary now, but they were equally scary about ten years ago, when I delivered meals on wheels. There was a guy who lived on the 13th floor of one of the flats, a younger guy, who'd had his leg amputated. The lift was always broken and you would have to run the whole way up hoping the landings had working lights. Eventually I got friendly enough with the guy to ask what had happened to his leg. "Lost it through the drugs mate." he said "Oh right. Trouble with yer veins I take it?" "Naw mate, someone shot it aff". Anyway, hopefully the demolition will all go fine.