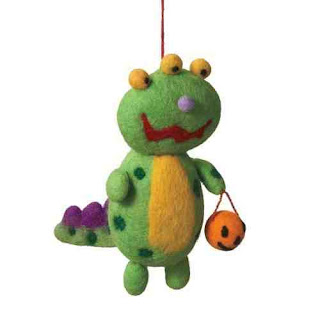 I'm not going to spend the year blognovelling at ye, tried that once, got fed up. But this is the nth draft of a first chapter from a childrens story I've now written quite a few wee bits of. Not enough to call it a book or anything, still footering away. Its my resolution this year to finish it. So I thought sharing the start here at the start of the year, would be a good way to make that more of a real commitment...

There was something strange about the way Megan's gran had exploded. It wasn't that she was on holiday at the time, it wasn't that it was really unlucky because she had won the holiday in a competition, it wasn't even that she was waterskiing. No. It was that before exploding on faulty water skis on her unexpected holiday, she had not phoned Megan when she said she would. Gran always phoned. Always.

Megan's mum suggested that was "maybe because of all the sangria", but still, it didn't feel right. None of it felt right. Everyone made a sad understanding face when Megan said this, so she decided to stop talking about it.

Now, weeks later, she sat on her bed, holding a letter her gran had left for her. Megan brushed her dark curls out of her eyes and stared at the envelope some more. Not quite ready to open it yet.

The week that followed the explosion was very strange. Exploding on holiday is clearly quite an inconvenient thing to do; serious black suited people kept turning up at the house with forms for Mum and Dad to fill in. Newspapers and a television crew wanted to speak to them as well, because it was such a "tragic" and "unusual" story. Megan was pretty sure her gran would have been delighted to be tragic and unusual.

Then they started getting the letters. Lots of people still remembered Megan's Gran from when she wrote scary books, and sent them emails or cards or flowers to say how sad they were, some even sent little cuddly knitted toys of her monsters. Mum really didn't know what to do with those, even though they were woollen, some of them were still pretty terrifying. Gorskyn had always been Megan's favourite creature, so she took one of those ones to keep in her room, its little tentacles had tassles on the end.

She and her brother Lewis had not been allowed to go to the funeral, because dad said it would be, "too sad", which Megan sort of thought was the point. Even clown funerals must be sad. There were no sad understanding faces when she said this though. She was pretty sure Mum quietly phoned the doctor.

Instead, while everyone else went up to the hillside cemetery, Megan and Lewis had gone to the cafe in Gourock with an elderly aunt, Grans's cousin. Lewis got an ice cream and Megan got a cappuccino just for the foam and sprinkles.

Outside, the river splashed gently against the pierhead, there was not a cloud in the sky. 'It should be stormy on a day like this,' thought Megan, 'there should be lightning and trees blowing over. Not sunshine and ice cream.' The sun just carried on shining regardless.

To take her mind off the fact that she wasn't getting to say goodbye to Gran properly, Megan tried to talk to the elderly aunt about her, but elderly aunt just wrinkled her already wrinkly nose, so that it ended up looking like a walnut, and said 'Best not. Lovely lady. But a strange one. All that sad business when she was wee.' Megan made a mental note to send her a cuddly monster and continued staring out the window onto the river. Seagulls dipped and dived in the breeze. Elderly aunt bought them some strawberry tarts, and then they went home.

Almost dark enough now. Megan stared at the envelope. It was from the stationary set she had made Gran for Christmas last year. It had taken ages, but everything had been handmade, from the paper to the little wooden box it all came in. The letter smelled of Gran's perfume.

Megan thought again about the last time she saw her Gran. It was the day before she went on holiday. Gran had suggested they go for a walk round the dam to feed the swans. Megan had thought she seemed a bit sad for someone who had won a free holiday, but had just assumed it was one of those strange grown up things.
'It's a shame you didn't win another ticket. I could have come with you.' she said.
'Och it'll be all bingo and karaoke, not your type of thing at all.' smiled Gran.
'You don't play bingo.' said Megan.
'There's usually nothing else to do on these old people holidays. I'm taking my nintendo.'
There were baby swans this year, and they fed them some of Gran's fairy cakes.
'Are you okay?' asked Megan eventually.
'Hmm? Ach fine. Whenever I'm stuck, I come and have a bit of a sit in the park.'
'When do you get stuck?' asked Megan, 'You always know what to do.'
Megan's Gran smiled quietly for a moment, watching the family of swans flapping happily across the dam, dancing in the last of the summer sunshine.
'Do you remember when I used to read you the ugly duckling?' said Gran.
Megan nodded, hoping this wasn't her Gran's attempt to start talking about growing up.
'You always did a funny duck voice.' said Megan.
'Well...it's a load of rubbish. No such thing as ugly ducklings. People spend years waiting to be beautiful swans. What a waste of time. Just be a beautiful duck and get on with it.' Gran turned and grinned at Megan, then steadied herself with her walking stick. 'Come on, you can help me finish packing.'
Megan had wanted to tell Gran her secret that day, she knew she would understand, know what to do. Instead, she walked her home, stayed for tea and spent the evening discussing who the best looking vampires were.
'I'll phone you 6 o'clock tomorrow night, once I've had a chance to check out the handsome barmen.' said Gran with a cheeky wink.
Megan laughed, kissed her goodnight and went home.
It was too late to tell her now. All too late.

It was yesterday that dad had taken her to the lawyers office to get the letter. Her letter. Mum and dad had already been to see the lawyer about Gran's will - she had left them a bit of money, not millions of pounds or anything - any money Gran had made, she enjoyed spending while she was still alive, taking them all on holidays or out for dinner and laserquest. Gran always cheated at laserquest. But there was still some there. Enough for them not to worry for awhile. The most important thing though, was her Grans final instruction, that a letter be personally handed to Megan, that no one else was to open or read. The letter was waiting for her at the lawyers office.

The office was not far from the town centre, in one of the bits that was being rebuilt, or demolished. It was sometimes hard to tell the difference, the whole town seemed to be scaffolded, like it was being held up in case it fell over.

Megan was hoping the lawyers office would be all wood panels and old green leather chairs, but it looked a bit more like an opticians, all shiny glass and chrome.
'Your grandmother lodged the letter with us 6 months ago,' said the Lawyer. 'It has been in the safe since then. A few weeks ago, she visited us to give us two further instructions. First, she made it very clear to us that we are to advise that you open the letter alone.'
Megan nodded.
'Secondly, she asked that you return here next year, with the contents of the letter on the 23rd May. Is that clear?'
'That's her birthday.' said Dad.
'Those were the instructions. Can you do that Megan?'
Megan nodded again, feeling suddenly very grown up and serious.
The Lawyer handed her the letter and, surprised by her own shaking hands, Megan took it and put it inside her jacket pocket, holding it carefully, as if it were full of diamonds and gunpowder.

Mum had been really nosey about it, wanting to know what it said, and Dad had told her that if it was a cheque she had to tell them about it. It was Megan's letter though, and she insisted on waiting until everyone else was in bed before opening it. Alone. Just like Gran had asked.

She pulled gently at the envelope, trying to take her time over it. Inside, was a very small piece of paper, some of the vellum parchment Megan had made by flattening out wood pulp.
'There can't be much written on that.' thought Megan, just a little disappointed.
There were two other items in the envelope; a piece of old newspaper and one of those foldout street maps of the town. For now though, Megan was only interested in her letter. Sure enough, it was very short, but the first line said almost everything Megan hoped it would.
'Dear Megan, I know why you can fly.'