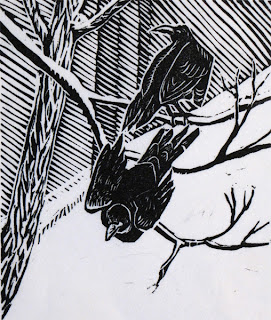 The first snows had fallen, and as Christmas was on the way, the Robber was out looking for a gift for his wife.

He had passed three little houses so far, but everyone was still awake, singing and drinking mulled wine. He was beginning to worry that he wouldn’t be able to steal anything for his wife at all, when he saw a little house by the trees all hidden in darkness.

The robber peered quietly in through the windows, no one was home. He carefully opened the door and sneaked into the house. It was a very bare house, with not much to steal, but just as he was about to leave and try somewhere else, the robber noticed a little mirror lying on the table. Thinking that would be ideal for his wife, he snatched it up and ran out of the house.

What the robber did not realise, was that this was the house of Old Mab, the witch. The mirror was to be a gift for her niece. It contained three wishes. When Mab returned and found the mirror stolen, she cursed the little mirror, and the thief, and then sat down at her fire to wait.

On Christmas day, the robber gave his wife the mirror and she was very pleased.

A few days later, she stood by the window admiring herself.
“If only my eyes were as dark as my hair.”
And at once, her eyes turned black as coal and all the world around her was in darkness. Cursing and blinded, the wife threw the mirror out the window into the river that ran behind her house, and it was carried away down stream.

The poacher was out that day, and as he stood, stealing fish, he saw the mirror come floating by. The poacher was not popular at home at the moment, as his wife did not appreciate the trout he had given her for Christmas. “This will fix things!” he thought.

So the poacher took the mirror and gave it to his wife that evening over supper. She was so delighted that he got two helpings of pudding.

A few days later the poachers wife was walking home, admiring herself in the mirror.
“If only my nose were as small as my feet.”
And at once, her nose shrunk back into her face until it was not there at all.
The poachers wife threw the mirror into a field as she ran past shrieking.

There was no pudding that night.

Later that night, the horse thief was out in the fields, having very little luck with so many horses stabled for the winter. As he wandered, he found the little mirror. The Horse Thief had not only forgotten to get his wife a gift for Christmas, but had also forgotten that it was her birthday a day later. “She will certainly like this mirror!” And so she did.

A few days later, she stood admiring herself in the mirror.
“If only my lips were as red as my cheeks.”
And at once her lips grew a dark, angry red, drawing all the blood from her face and leaving her pallid and weak. The horse-thief’s wife no longer had the strength to hold the mirror, and she dropped it. As she did, a crow flew in through the window and caught it. And the crow knew just what to do.

Old Mab sat by her fire and smiled as the crow flew in with her mirror. She gave the Crow some crumbs from her Christmas Cake. The she wrapped the little mirror with a slice of cake, and walked down to the village to see her niece.

Love’s greatest gift is to see that love reflected. That is something which cannot be stolen.
Posted by Paul Bristow at 08:00