Watership Down : When Frith Sleeps 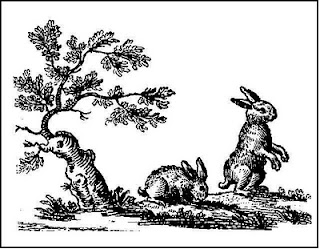 This month's fanfic celebrates the 40th Anniversary of the publication of Watership Down by Richard Adams. If you are only familiar with the excellent animated version, the book is well worth exploring, especially for the folktales about the rabbit prince El-ahraihrah. Adams released a sequel in 1996, which collected many more of these rabbit folktales. I've gone for something in that vein..

At the turn of each year, the Lord Frith must sleep, and rabbits fear this time most of all, for the days grow shorter, and elil claim the long nights as their own. One year, Frith had been busier than usual with the summer and harvest, and slept longer than before. So there came a bitter winter, with high winds and deep snows - rabbits gathered and huddled in burrows, and every day fewer and fewer woke up. And so those who still had strength came to El-ahrairah and asked him to help.


El-ahrairah went to the Prince of Rainbows and asked for him to waken Frith and hasten the springtime.
"All the seasons have their time El-ahrairah, and neither I nor Frith himself can hurry them. But there is one who can make the winter less cold."
"Who is it?" said El-ahrairah "For my babies are dying in this long freeze."
"This season belongs to  Marlie Eleer, the Queen of Midwinter, and only she can ease the winds and snow."
"Excellent!" said El-ahrairah "Where may I find her?"
"She will not be easily convinced…" said the Prince of Rainbows, for her very heart is ice."
"Am I not El-ahrairah who visited the Black Rabbit of Inle in his stone burrow, who bested the Crow Witch at her riddles and who has dined with ancient Kings in the hollow hills?"
"Very well El-ahrairah. The Queen of Midwinter lives just beyond the other edge of the world in a castle made of frost and bones. The only way to get there is to follow the frozen river from the end of the forest, and when you pass the edge of the world, the frozen river is the bridge of ice you must walk across to her keep."

El-ahrairah returned to his warren and bid his good friend and brave companion Rabscuttle to once again join him on an adventure. And as a new snow started to fall on their friends and families, they began to follow the frozen river.

The river ice cracked and splintered beneath their cold feet on the long journey, and just below the surface, blind pike snapped and grinned, waiting for the rabbits to fall through into the icy dark.

They followed the frozen river up into the jagged mountains, where the giant eagles nest, and daily they screeched and swooped down on El-ahrairah and Rabscuttle, so that they had to hide in the mountain caves among the bats and wild pfeffa.

The river ran down the mountains into the zorn lands, scorched black by man. And so they came to Lendri Pass, where the ghosts of dead badgers prowled the fields, looking for rabbit souls to feast upon, their cold claws grabbing and dragging away the unwary. It's said Rabscuttle lost three years off of his life in their journey across the dead fields.

And finally, they saw the other edge of the world and the castle of the Queen. On the icy bridge, stood a pure white She-Wolf, the Queen of Midwinter herself.
El-ahrairah and Rabscuttle tried to cross the bridge, but the Queen growled, not allowing them passage across.
"Queen, I am El-ahrairah, Prince of Rabbits, and I come to ask you to ease the winds and snow, for the winter is hard on my rabbits."
"And why would I do that? What do I care for rabbits? Or for anyone else."
El-ahrairah could see that the Queen was lonely, and her heart would only grow colder with each passing winter. And right away, he thought of a way to solve their problem.
"Good Queen, you should travel to see how your winter changes the world. It is most beautiful and there is much more than can be seen from your castle. If you meet me at the edge of our forest in one week, I will show you the icy webs spun by the snow spiders and the fields of woven snowflakes.." said El-ahrairah.
The Queen thought about it.
"My winter is beautiful?"
"Oh indeed," said El-ahrairah, "and if you were to meet me in a week, I could show you it all."
"We shall never get home in a week!" whispered Rabscuttle.
"We shall," said El-ahrairah "for already the frozen river is thawing."
So Marlie Eleer agreed to meet them in one week and wasting no time, El-ahrairah and Rabscuttle balanced on broken trees and sailed back home down the river.

When they returned El-ahrairah sent Rabscuttle back to the burrow with some winter provisions for the pups. Then he sought out the Prince of Rainbows and asked him to take him to the sleeping Lord Frith.
"I will take you El-ahrairah, but you must not wake him, for if you do, we'll all feel the wrath of his fiery temper."

For five days, El-ahrairah watched the King as he was sleeping, and whispered in his ear about the beauty of the Queen of Midwinter. On the sixth day, he whispered to him to wake and meet him at the forests edge the next day.

The next day, El-ahrairah waited by the forests edge. The trees grew brittle and cold as the Queen of Midwinter swept down the river, and then, the ice melted on the branches as Frith came down from the sky. The King and Queen looked at each other, bowed in respect and then smiled. El-ahrairah knew his plan had worked.

So it was that El-ahrairah played matchmaker for Lord Frith and Marlie Eleer, and while the winters are still cold, and Lord Frith still sleeps, the Sun King and the Queen of Midwinter now meet for a few days each year. On those bright cold days, the frost melts and rabbits can have a few hours silflay, and run to keep warm while Frith and Marlie Eleer share their winter dance.

The rabbits of Watership Down speak their own language, lapine. Adams provided a glossary in his books, but further work on developing the language has been done since then, check out this English-Lapine dictionary.