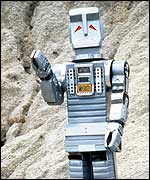 March 11th 2012 would have been the 60th birthday of writer and thinker, Douglas Adams. This is the first of two blog entries which are by way of a wee tribute.

Adams is of course most famous for The Hitch Hikers Guide To The Galaxy, but in 1983, he and John Lloyd published The Meaning of Liff, "a dictionary of things that there aren't any words for yet"

"In Life, there are many hundreds of common experiences, feelings, situations and even objects which we all know and recognize, but for which no words exist. On the other hand, the world is littererd with thousands of spare words which spend their time doing nothing but loafing about on signposts pointing at places. Our job, as wee see it, is to get these words down off the signposts and into the mouths of babes and sucklings and so on, where they can start earning their keep in everyday conversation and make a more positive contribution to society."  Douglas Adams & John Lloyd

If you are interested in wordplay, you can win copies of the book by submitting your own definitions, or you can just increase your vocabulary daily by following on twitter. Here's a few of mine.

carmunnock - to scowl at small happy children in public places

ecclefechan - an ancient scottish curse. Now most often used after standing on a piece of stray lego during a night time trip to the bathroom

largs - the chewy bits of gristle and batter at the bottom of a fish supper or more regularly, stuck to the side of a deep fried mars bar

pittenweem - a close friend at work who becomes your manager and immediately, a prick

urquhart - the quiet, serious pause after a husband suggests that he and his wife should visit a swinging club

wickham market - to compose a shopping list during sexual intercourse


UPDATED - 10 March 2012
The Liff competition has now closed, here are the winning entries, official "new Liffs" as chosen by the mighty John Lloyd himself. I'm delighted to humblebrag that one of mine is among them, but hats off to the winner Craig Warhurst for Peakirk.

ANGLESEY n.
Hypothetical object at which a lazy eye is looking.
(AJ Dehany)

ARDENS GRAFTON n.
The extra work you have to do because you cut corners the first time.
(Ian Cattell) 1

BODELWYDDAN adj.
Unable to walk straight after getting off a roundabout.
(Simon Beasor)

COBNASH n.
Anything that falls out of your sandwich and into your drink.
(Ian Cattell) 3

FACCOMBE v.
To decide against helping those less fortunate than yourself.
(UsrBinPRL)

GAWCOTT n.
A baby so ugly you can’t even tell which way up it is.
(Ian Cattell) 4

GRANTHAM n.
One who sniffs fruit in a supermarket.
(Ruth Maher)

GRINDLETON n.
The innocent smile adopted by a baby moments before it throws up all over you.
(Mal Blackburne)

HATFIELD n.
The sense that one is still wearing a baseball cap long after it has been removed.
(Philip Calvert)

MAURITIUS n.
A clump of pubic hair that always gets missed when one is shaving one’s scrotum.
(Matthew Imrie)

NETHERAVON n.
Any nook, cranny or cavity with enough room for a small object, or your fingertips - but not both - to get into.
(Nick Kent) 2

ORTON WISTOW n.
A stretch intended to disguise the fact that you are sniffing yourself for B.O.
(Jon Freeman)

PALMERSTON n.
The dried streak left by an earlier attempt to clear a vehicle’s window of condensation.
(Will)

PEAKIRK n.
One who regularly points out that there are no lavatories on the USS Enterprise.
(Craig Warhurst) 1

SIX MILE BOTTOM n.
A lengthy and depressing period of time during which the question “What else could possibly go wrong?” is emphatically answered by a series of increasingly unlikely and embarrassing misfortunes.
(Matt Dupuy)

SPALDING ppl vb.
The futile waving of the hand in front of the mouth when eating something much hotter than expected.
(Craig Warhurst) 2

TUTBURY n.
A jiggle of the leg in an attempt to free a sweaty scrotum from the thigh.
(Fiona Dickinson)

WINNINGTON n.
The sound of cheers carried on the breeze from a distant sports field.
(Terri Washburn)

WOOKEY HOLE n.
The small gap through which you can clearly see the gift after you cut the wrapping paper to almost exactly the right size.
(Nigel B)

WOOLLOOMOOLOO n.
The small, pinkish ball of lint found in the tumble-drier after washing one’s underthings.
(Holly)
Posted by Paul Bristow at 08:00