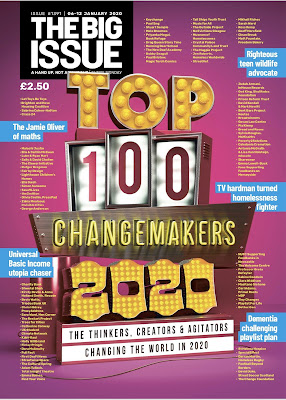 At this particular point in my life, I'm extremely lucky, because everything I do is about stories. And in addition to my own writing, and work with digital storytelling, I also run Magic Torch Comics CIC, which works with schools, community groups and organisations, to tell stories using comics.

Magic Torch Comics are looking forward to a busy 2020, and it’s off to a flying start, as we were named one of The Big Issue’s Top 100 changemakers for 2020. It’s a great list, full of amazing people and projects, and we are delighted to be a part of it.

Magic Torch Comics have lots of projects happening and comics launching in the first half of 2020, and I thought we would share them with you now, so you know what to look out for.

In March, we have two books launching on World Book Day (Thursday 8 March) – a collection of Gaelic Folktales created with the Callander’s Landscape project, and a story book of Syrian, Somalian, Kurdish and Scottish folktales produced with Inverclyde Community Development Trust and local ESOL learners supported by Inverclyde Community Learning and Development. And later that month, we'll be showcasing the work of the young people we've worked with on Inverclyde Libraries Making Waves project.

In April, we’ll be launching 1820 – The Paisley Radicals at Paisley Comicon. The book is illustrated by Dylan Gibson and the project was funded by Paisley CHEF fund. It will be previewed at Paisley Book Fest at our Make Comics History workshop on Sunday 23rd February.

In July, we will be at Glasgow Comicon, launching the first of our Outside The Box anthologies. Outside The Box works with marginalised young people in the Inverclyde community, to create comics which share their ideas and lived experiences. The project is supported by National Lottery Community Fund and you can see a promo video for the project below.

Back in 2018, we lost our colleague, Andy Lee, who had worked with us since we started making community comics. We had completed a comic with Andy about the life of Scottish Pirate Captain Kidd, but decided to shelve it. However, with the blessing of Andy’s family, we will be releasing the book, I Thought I Was Undone later this year as a charity publication. More details soon.

We will also have a huge range of information comics releasing – created with schools and community groups and sharing information and stories from the Scottish Parliament, Health and Social Care Partnerships and the Poverty Truth Community. We are so delighted with the diversity of projects that we are asked to get involved with. Please keep them coming!

And in the unlikely event that’s not enough comics for you, Magic Torch Comics also hope to launch our first Kickstarter this year, for a comic which explores the story of The Stone of Destiny, released in time for the 70th Anniversary of the theft of the stone this Christmas. Fingers crossed.

There’s more on the slate, but that’s what we can tell you for now. As ever, if you are interested in getting involved in our projects, would like to know more about what we do or even have a potential idea for collaboration, please get in touch.

We'll share lots more on the projects over the next few months, so keep an eye on the blog, twitter and our facebook page to stay up to date.