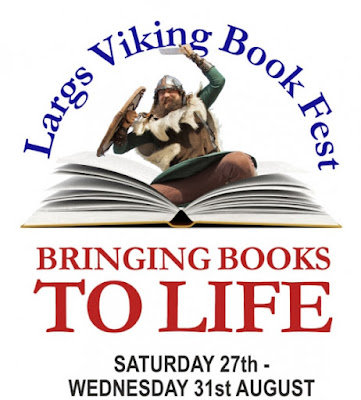 Always a cultural highlight - there's lots to see and do, you can check out the full programme online.

This year, I'm delighted to be taking part in the Viking Book Festival. I'll be at the Woodhouse Hotel on Sunday 28th August at 7pm, discussing comics, folklore and heritage - with a sprinkling of spooky stories and Superpower Project.

There's loads of cool events at the Book Festival, but if I had to pick another "must-see" it would be an afternoon of polite Viking Mayhem with fellow Kelpies authors Robert Harris and David MacPhail - you can catch them on Sunday 28th August on the Festival Stage at 3.30.

Hope to see you at the festival.

It being August, I always like to remember HG Wells Martian invasion from The War of the Worlds - still my favourite book. Here's a wee fragment of backstory from something I'm tinkering with...

For the first few years, the prevailing wisdom was that rural communities had suffered less during the Martian invasion. The Martians had largely concentrated their efforts on cities and suburbs, and that is where the greatest physical destruction took place. The destruction of our countryside was more subtle, less immediate.

Certainly, the Fighting Machines which had travelled further afield to create outposts had churned up or burned huge swathes of rural land, and several Martian cylinders had also crashed – by accident or design – in areas such as Cornwall, or even further north in Lancashire. It’s also true, that after the war, country estates suddenly emptied, with their city owners either dead or indebted amid the financial ruins of London, there was no management of the land. Labourers walked across country to find work anywhere they could, leaving ghost villages behind them. But this was not the problem either. It was the red weed - that bitter Martian frond, which spilled out across the world, strangling water supplies and spoiling crops and fields.

The red weed’s life cycle is brief, but relentless. It spawned and died during that terrible August and September of the invasion. But unlike the Martians, the weed returned with a vengeance at the start of the following year. It destroyed any chance the country had of farming its way out of the famine that had endured since the end of the war. It became clear the weed would have to be effectively and aggressively managed. Suddenly, there was work to be done in the countryside once again, and itinerant families returned, including many who had left for the cities during industrialisation.

Weed is gathered in a number of different ways, but there is currently no mechanised or industrial approach, as any machinery is instantly snarled and sheared by the density of the red roots. Instead, teams of workers haul the weed directly out of the ground – almost like a game of tug of war with the earth itself. Where the weed is regularly kept in check, this is a time consuming, but straightforward process. In situations where the weed has overtaken the land to a severe degree, the work is harder and more dangerous – fire and paraffin must be administered to weaken the weed prior to any removal.

Once torn from the ground, the weed must be incinerated completely. This is generally done in huge metal barrels sunk into the ground of each farm, and the fire will burn for many weeks. The determined nature of the weed is such, that even at this stage, it can spore and crawl from the furnaces. These flaming tendrils are often a source of amusement for local children – long fingers of flame, clawing their way out of the pits. Older children will dare one another to jump over them, risking tragedy.

Not all the weed is burned of course. Each farm will be able to sell small amounts to nearby towns and cities, cut and frayed to create weed ribbons for display during war commemorations, or dried and fashioned into lapel pins. This is skilled work, most often performed by women and I observed many groups of them around the country. All of them sing “loo-lally” as they tear and weave, appropriating the howls of Martian language into work-songs. The red stained fingers of the weed seamstresses mark them out as artisans. Only too recently have we come to realise what else their exposure to the weed will mean.
There's more Martian fun on the blog...you can read my Wind in the Willows / War of the Worlds mashup from a few years back, or enjoy Loola of Mars by myself n Mhairi.
Posted by Paul Bristow at 10:49