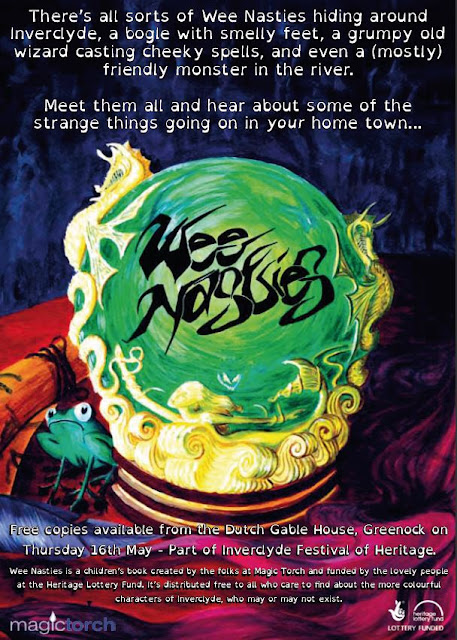 As part of the first Inverclyde Festival of Heritage, Magic Torch will be launching a childrens book supported by Heritage Lottery Fund Scotland. It's a poem intended to introduce younger readers to some of the myths and legends of Inverclyde.

You can get Wee Nasties, written by myself and illustrated by Mhairi Robertson at The Dutch Gable House on Thursday 16 May. It will also be available for free download via amazon later in the month.

Here's a recording of Wee Nasties and some other silly childrens poems...

Here's a few draft chapters from Tin Jimmy, the other locally based childrens book I'm working on.

And here's some of Mhairi's wonderful sketches for the project, which will be on display with other original artwork from the book at The Dutch Gable House from 16 - 19 May and again later in the month...


Another bit from a book I'm messing around with. If you haven't already, you can also read Chapter One and Chapter Two.

Megan's Gran has died, leaving her a mysterious map of her home town. Megan and her friend Cam spot the first location on the map during a school visit to a local shipyard to watch some public art being made. When everyone else has gone, Megan and Cam here a strange, angry tapping coming from inside the Phoenix Egg sculpture...

The lights flickered back on, silencing the tapping instantly. Startled, Megan and Cam turned to see Mr Finn at the doorway, staring.


'Your class are leaving,' he said, 'you had better go and catch them up.'


'Dropped my phone,' said Cam by way of explanation.
'Yes. You should really be more careful.'
Mr Finn stood, waiting for them to leave. Both of them were only too happy to get out.

It took Megan all day to convince Cam that following the map into the old air raid shelter behind the supermarket was a good idea. Probably because it wasn't a good idea. It was a terrible idea. A terrible idea with a very good chance of rats.
'Hah! You aren't scared of rats are you Cam?' she'd said, not even fooling herself.
'No. I'm scared of black death and lymes disease.'
Megan had to google that.
It was pretty scary. So many scabs.
Eventually she gave up trying to convince him and announced she was going alone. That's when he agreed to come. Megan made a mental note to remember that for next time.
The old air raid shelter was a series of interconnected tunnels hollowed out under a cliff. Cam said it ran down underground for miles. It had been built especially for the workers of a nearby munitions factory which had just been turned into very posh flats.
Officially of course, it was now a hazard to health and safety, all blocked off and locked up. Unoffically, you could squeeze in behind the dodgy garages.
Cam was tucking his waterproof trousers into his welly boots for the third time.
'Cam honestly, you're fine.'
'What about leeches?'
'I don't think you get leeches here. Or pirhana.'
'You might. No one's been down here for years. It's an undisturbed ecosystem. Anything could be living there.'
'Velociraptors under Port Glasgow?'
'No. But there's that Big Cat people are always seeing on the hills behind the town.'
'And with miles of moorland to run across, it lives behind a supermarket? An urban puma.'
'Puma, velociraptor, pirhana...if I get eaten, you'll have my mum to deal with.'
Megan was actually a bit scared of Cam's mum - she was a nurse and not really one for nonsense. One time she found out he'd been trading all the fruit in his packed lunch for sherbet and wham bars and he was only allowed to eat raw vegetables and porridge for the rest of the month. That had been a really tough month for everyone.
'Okay? Ready to go?'
Cam nodded glumly.

The two splashed into the darkness. The water was deeper than Megan had thought it would be, and she was starting to wish they hadn't bought their torches in the pound shop.
‘My gran wrote a story about a place like this…maybe the old railway tunnels that people hid in during air raids?’
‘Was it a funny story with a happy ending?’
‘Not really. The end of the tunnel had collapsed as people were running in to shelter, and for years after there were always these wee sad grey figures who would try and get kids to come down and play on the tracks with them. Every so often, someone would go down to play, and they would be found later, people just thought they had been hit by trains or electrocuted on the tracks,  but actually it was because the blitz children had dragged them off into the tunnels with their wee cold hands.’
The dark seemed briefly darker, and colder too.
‘Great story Meg. Thanks for sharing. She was always a right laugh your Gran.’
‘I know a few more…’
‘Do they have clowns in them? Or rats? Because those stories can wait.’
Megan stopped suddenly and gestured for Cam to stop too.
‘Shh. What’s that?’
There was a distant splash which echoes through the empty dark. Then another. And another. The unmistakeable splish splash of something else, walking through the tunnels towards them.
Cam looked around, trying to get his bearings, ‘Which way is that coming from?’ Megan shushed him again.
More splashing, faster now, and nearer.
Cam reached for Megan, taking her hand to run back the way they had come.
‘No it’s coming from that way. Go this way!’
Cam turned his torch towards the nearest junction in the tunnels, two eye beamed eerily back at them, reflecting the faded torchlight. They both screamed as the creature splashed quickly towards them, its startled eyes dancing ever closer through the black. In a moment, the terrified deer had run past them both and back out into the streets above.
Cam was still screaming long after it had gone.
‘Cam? Cam it’s away now. It was just a deer.’
‘Did you see those eyes? It looked evil.’
Cam fumbled through his pockets, finally producing a packet of chewing gum.
‘Evil.’
The two friends stood in silence for a moment.
‘See,’ said Cam, ‘there could be a puma down here.’
‘Maybe that’s why the deer was running,’ said Meg, it was supposed to be a joke, but it was too soon.
‘Can we go yet?’ Cam scowled.
‘Just five more minutes. My gran wanted me to come down here, I’d really like to know why.’
Steadying one another as they went, they wandered through what felt like miles of tunnels, past the rotted bench and bed frames where families must have huddled together as the bombs fell, past the tiny cubicles people used as toilets and down towards the huge machines which stood at the tunnels end.
‘What are these?’
‘Maybe for air conditioning. Or water pumps?’

The torchlight illuminated a face amongst the rust, startled, Megan stumbled back into Cam.
‘Look at this!’
It was a figure, a person, sculpted and built from metal. The head was a near perfect sphere, studded with rivets. Two eyes, large hexagonal bolts, stared vacantly into the shelter and a wide rectangular gap, like a broken letterbox, was the figures mouth. It hung open as if in surprise, or perhaps, silently screaming.
‘Cam, it’s…it looks like a robot.’
In the low light of their pound shop torches, steel still gleamed through all the grease and dirt.
'It looks a bit like one of those new Waterworx statues.' said Cam 'What do you think its doing down here?'
'I've no idea. Looks like it's been here a long time though. This must be what Gran wanted me to find.'
'But how did she know it was here? Did she build it do you think?'
'Doubt it. She couldn't even do lego.'
Cam tapped it gently. At once, the robots eyes flared an angry orange and it grabbed Cam's arm.
'Unnnnnderaaaaaattack. Ehhhhhnnnehmeee.'
'Run!' shouted Cam.

Beneath quiet dark,
The creature, restless, writhing,
Rising toward sky. 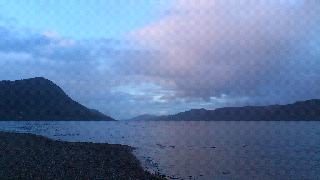 Three warriors protected the village. It was a small village, and they were brave warriors, just and well respected. They defended with honour, taking no pride in their skill, caring only for the families in their village.

One day an elder from the next village asked if they would help defend them from bandits. At first, the warriors refused, their place was with the village they loved, defending their families and friends. But the elder offered them a bag of gold coins for their trouble.
'What harm can it do?' said the First Warrior, 'with this gold we could buy more defences for our own village and even build more houses.'
So the warriors left and defended the next village from bandits, and returned a little richer.
Word spread further about the warrior's skills, and more villages came to ask for their assistance, offering more gold.
And the warriors took the gold, built more houses, and bought weapons to arm other warriors to defend the village while they were gone.
So it went for many months, the warriors trained more warriors, and sent scouts to other villages to ask if they needed defending from anything. That's how they found the dragon.

The dragon was causing all sorts of trouble for a town in the north, but it was so large and so vicious that it would take an army to defeat it. But by now, the little village had an army.
'If we best the dragon, people will know how skilled we are.' said the First Warrior.
'And if we break the dragon, it will be ours to command.' said the Second Warrior.
'We will be unbeatable.' said the Third Warrior.
So it was they marched north, battled the dragon, and won.

And the dragon was wonderful and terrible, assuring the warriors victory in every battle, but it was greedy, needing gold to survive. So the warriors had to ask for more gold from the villages they defended, and to steal gold from villages not in their care. They swept across the land, feeding the dragon.

One day, the warriors came upon the village that had once held the most important place in their heart. Blackened from the fires and smelts of the forges which crafted weapons for their many armies, the houses all gone. And on the mountain above, rested the dragon, always hungry, always waiting.

The warriors saw their folly, but it was too late to change things. The dragon roared, the forges burned and the gold rolled slowly in.

And the warriors marched to the next village, no longer remembering whether they were there to defend or attack, knowing it no longer mattered.